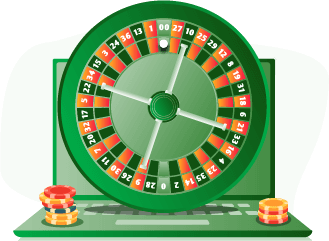 Roulette is comparatively easy when you measure it against strategy-based games like blackjack or video poker. After all, you simply choose your bet, i.e., a number, color, or group of numbers, then spin the wheel and hope that little ball lands on your desired outcome.

But even though roulette is a game of chance and impossible to predict, it’s still worth understanding how these losses and wins can occur. With the GamblingPedia roulette simulator, you’ll be able to see in detail how the game plays out when you factor in probability, the use of different systems such as the Martingale, Paroli, or Alembert Strategy, and how payouts are calculated.

How the Roulette Simulator Works

Our free roulette trainer allows you to try out different betting markets and strategies in roulette while deepening your understanding of factors like logic, rules, and the probability associated with the game. This simulator can also be used to get you to grips with the dynamics of other roulette variants besides the classic version, including the American roulette simulator, French Roulette, and European. As it’s doesn’t require any payment, download, registration, or software installation, you can simply load it up and play directly through your browser – without any financial risk!

How To Win At Online Roulette

When you play roulette for real money, the riskier the bet, the more profit you’re likely to make. There are several different betting possibilities in roulette, which involve betting on single numbers or groups. A number group could include all numbers colored red/black or all numbers that are even or odd. For example, when you bet on red, your bet covers 18 numbers on the wheel, which gives you a higher chance of winning. But the truth is, you’re likely to make a bigger profit by betting on fewer numbers because the probability of winning is much more unlikely.

The Randomness of Online Roulette

Players experienced in roulette often try to overcome the house edge by employing progression-based strategies. Positive and negative progression systems both involve adjusting the amounts a player puts on a stake based on the outcome of the previous bet. As a result, they will either compensate for lost wagers or earn more money when they hit a winning streak. Even though these strategies are popular and have proven to work for some, they are still just probabilistic concepts with no actual science to back up their effectiveness.

Why is this the case? Because like traditional land-based casino roulette, online roulette is also random. The only difference between the two is that while one uses a croupier to spin the wheel, online roulette outcomes are determined by random number generation software. This technology prevents players from being able to make any accurate prediction of an event.

Even though it’s impossible to predict the results in roulette, we can still be sure about one aspect of the game: it’s 100% certain that 1 in every 37 (or 38 if playing American roulette) events will be a winning one. The objective for roulette players is to win as many of these events as possible.

Particularly if you’re new to playing real money online roulette, you should get used to using a roulette chart alongside our free roulette simulator. This will help you determine the bets with the best possible odds and payouts based on the version you’re playing.

When players put themselves in situations that can affect their financial integrity, gambling, in general, can become incredibly risky. Roulette can be highly addictive, making it difficult for people to stop and throw in the towel. Even if a player is seeing success with their bets and making a decent profit, nine times out ten, that player will attempt to increase that profit by continuing to play until they’ve eventually lost everything.

The same goes for players who are on a cold streak. They will continue to play in the hope of recouping their original stakes, only to be left chasing their losses and more out of pocket than before they started. These kinds of impulsive behaviors can lead many roulette players to become pathological gamblers, which is unhealthy, dangerous, and upsetting for both them and their loved ones.

A Brief History of Roulette

Roulette has existed since the 18th century when a French physicist called Blaise Pascal accidentally invented the roulette wheel in his attempt to build the perpetual motion machine. In the years that followed, roulette became widely popular in places like Germany, the UK, and other parts of Europe, which was also the time when different game variations were invented. In the 20th century, the American variant surfaced and is now one of the most popular games in casinos worldwide.

The original invention of roulette was never intended to become one of the most beloved games in gambling. Instead, it was designed to create a mechanical series of numbers that produced solid possibilities that could then be studied for their random distributions. While Blaise Pascal is said to be the unintentional genius behind the invention, many still believe that the idea of a wheel with numbers and probabilistic theories came from China and was later adopted by Europe – the mystery remains!

Roulette is considered one of the fairest casino games around, and that’s the reason it still remains one of the most popular in both online and land-based casinos. The rules are concrete, and you wouldn’t be able to manipulate the results even if you tried. Plus, the odds of winning are much higher compared to other lottery-based games like keno and bingo.

When it comes to real money roulette, the game is subject to certain legal regulations in some countries. However, because roulette is so popular, more and more countries and jurisdictions are beginning to relax their stance when it comes to this form of gambling, and if it isn’t legal in your place of residency yet, it’s probably only a matter of time before new regulations come into place and make it so.

All reputable and certified online casinos use random number generators, as these ensure that neither the house nor the player has an unfair advantage. Even our roulette simulator uses this software to accurately predict the results you’re likely to get when you place certain bets and play with specific strategies.